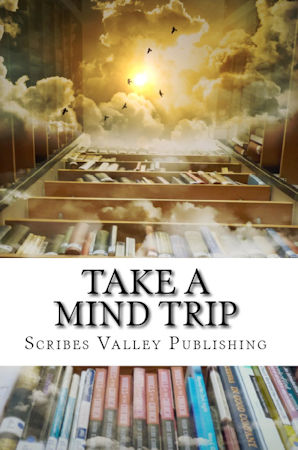 
Trips require a couple of things. First, you have to possess a body. There is no compromise on this.

Secondly, trips require some form of transportation, and demand that you go by air, water, or ground. And, unless you are walking, youre surrounded by a human-made contraption that limits your space as you move to your destination.

A Mind Trip, however, is completely different. With a mind trip, you are limited only by your imagination. Waitshame on us for using the word limited. We know better than that! A mind trip is limitless and borderless. Infinite doesnt begin to describe it. It astonishes the human mind and ignores the laws of physics.

The stories in this anthology will show you exactly what a mind trip isand how easy it is to take one. All you have to do is read the first word, and youre off. Bon voyage!

Catharine Leggetts short stories have appeared in the anthologies The Reading Place, Slow the Pace, Lose Yourself (Scribes Valley), The Empty Nest (KY Story), Law & Disorder (Main Street Rag), Best New Writing 2014 (Hopewell), as well as in the journals Room, Event, The New Quarterly, Canadian Author, and The Antigonish Review. Other stories have appeared online in paperbytes, Per Contra, and a novel excerpt in Margin: Exploring Modern Magical Realism, and broadcast on CBC Radio. A two-time finalist in the Columbus Creative Cooperative Great Novel Contest, her novel, The Way to Go Home, is forthcoming from Urban Farmhouse Press. A collection of short stories, In Progress, won the Eludia Award and will be published by Sowilo Press, an imprint of Hidden River Publishing, in 2018. She lives in London, Ontario, Canada.

As a part-time faculty member of the University of Pittsburghs English Department, Ronna L. Edelstein works as a consultant at the schools Writing Center. She also teaches Freshman Programs, a course that introduces students to the University and the city. Her work, both fiction and nonfiction, has appeared in the following: New Slang A New Literary Voice by the Women and Girls of Pittsburgh (online); Quality Womens Fiction; Ghoti Online Literary Magazine; First Line Anthology; SLAB: Sound and Literary Artbook; Pulse: Voices from the Heart of Medicine (online and print); AARP Bulletin (online and print); Healthy Roots (Forbes Health Foundation and Hospice); The Jet Fuel Review (Lewis Universitys online literary journal); Writers Relief (online); Seasons of Caring; Tales of Our Lives: Fork in the Road (online e-book); Signature (Carnegie Mellon University Osher publication); Verse Envisioned: the Poetry and Art of Pittsburgh; the Washington Post; and the Pittsburgh Post-Gazette. In Vera Veritas is Ms. Edelsteins tenth Vera story to be accepted for publication by Scribes Valley Publishing.

Bill Mesce, Jr., a native New Jerseyan, is a sometime author, occasional screenwriter, even more occasional playwright. He is currently on the Creative Writing faculty at the University of Maine at Farmington. Prior, he was an adjunct at a number of New Jersey colleges and universities. Before teaching, he spent 27 years in Corporate Communications at pay-TV giant Home Box Office.

Rebecca Evans served eight years in the United States Air Force, and is a decorated Gulf War veteran. She hosts the Our Voice television show, advocating personal stories, and mentors teens in the juvenile system. She held the title of Mrs. Idaho International and earned a B.A. in Creative Writing from Boise State University, minoring in Psychology, and was also honored with the BSU Women Making History in Idaho award. Her work has appeared in Gravel Literary magazine and is forthcoming in Fiction Southeast. Shes currently pursuing an MFA in Creative Writing at Sierra Nevada College and serves on the editorial staff of the Sierra Nevada Review. She lives in Idaho with her three sons.

Dorothy has been writing since her pre-teen years. In her early twenties, she became a member of the Rocky Mountain Writer's Guild in Denver, Colorado, from 1993 to 1995. Between 1997 and 2014, she spent those years as a stay-at-home mom to her two sons. She is currently a third-year undergraduate student majoring in English Creative Writing online at Southern New Hampshire University and has written several short stories, one novel, and two short plays. One of those short plays called "Falling Up Stairs" was performed on stage at a local theater in York, Pennsylvania, on January 20, 2018. Dorothy lives with her family in Lancaster, Pennsylvania.

Jennifer Companik holds an M.A. from Northwestern University, reads fiction for TriQuarterly, and writes for RadiantStreets.com. Her accomplishments include: first-prize in The Ledges 2014 Fiction Awards Competition; 2016 Pushcart Award Nominee, Border Crossing; fiction in The Evansville Review, 2017 issue; and a story forthcoming in The Bryant Literary Review. By reading her work you are participating in one of her wildest dreams.

Originally from New York City, Lucy Marcus currently lives in Southwest Virginia where she is an MFA candidate at Hollins University. She also works as a facilitator for Global Nomads Group, where she connects high schoolers in the Middle East, North Africa, and the United States. Her fiction and poetry has appeared in 805 Lit+Art, First Class Lit, and The Grinnell Review.

Israela Margalit is a critically-acclaimed playwright, television writer, concert pianist, recording artist, and recently a published author of short fiction and creative nonfiction, with awards or honors in all categories, including a Gold Medal, the New York Film & TV Festival, an Emmy Nomination, and Best CD the British Music Industry Awards. Her short stories have been published in anthologies and online in both British and American magazines. Her story California King Size was a top 25-out of a 1000 Finalist at the Glimmer Train Press Very Short Story Competition. Her story Too Much was a Runnerup at the R. H. Cunningham Short Story Competition. Her story A Whorehouse in Munich was Nominated to Pen Short Story Prize for Emerging Writers. http://www.israelamargalit.com/

Stephen J. Matlock is a full-time writer and a part-time author and gardener, often overwhelmed by both words and weeds. Along the way to adulthood (a promised destination and not a requirement of the journey) he has tried his hand at many things, from running a restaurant to working at Crate Expectations (a mill for building shipping containers), and even technical writing, where the goal is to tell people what to do, but nicely. He lives with his wife in the Pacific Northwest, and has seen his children fly away to build their own lives, although they do return regularly for food, advice, and help on finding what that pesky sound in the car engine means other than money. He is a member of the Christian & Missionary Alliance, and like most people in his faith community, is still working out the details of what it means to follow Jesus.

Carl Wooton has been writing and teaching for more than fifty years. His fiction, poetry, and essays have appeared in a variety of journals and literary reviews. His fiction is in The Hudson Review (four stories), Literary Review, Blue Lake Review, Green Briar Review, Sun Dog, Forum, Ball State University Forum, Cayuhoga Review, Georgia Review, Crow's Nest, Slackwater Review, Revue de Louisiane, Laurel Review, Beloit Fiction Journal, Ellery Queen's Mystery Magazine, Chatauqua Literary Review, and in the anthology Rigorous Mortis and other journals. In 1990, he co-authored Ernest Gaines: Conversations on the Writer's Craft, with Marcia Gaudet (LSU Press). He retired first in 1993, after teaching for twenty-eight years at University of Louisiana-Lafayette. Not even moving to California's coast could make him not want to return to the classroom. He taught twenty more years at Cal Poly State University in San Luis Obispo until June, 2013. At 83 years old, he still writes and is working on two novellas, a collection (maybe two) of stories, and a novel in whatever amount of energy and time he is allowed. To paraphrase (badly) Achilles, Life is hard, but any part of it is a damned sight better than the alternative.

He has seven sons/stepsons, twelve grandchildren, two great grandchildren. He lives with his wife, Dolores, in Nipomo, California.

A bottle-fed Baby Boomer, Mike moved from New Jersey to Georgia in 1965, and has been soaking up Southern culture ever since. After decades working the environmental consulting racket as a geologist, Mike uses his semi-retirement to capture a lifetime of observations and evolving philosophy in the guise of fictional short stories, flash fiction, novellas and a novel. In addition to 23 published short works, he has twice been a finalist in The New Yorker Cartoon Caption Contest, getting a total of nine words in that prestigious publication. Mikes website, bunker93a.com, serves as his manifesto and showcase for his work.

Ruth is from Philadelphia and lives and works in Vienna, Virginia, with her husband and three children. She is a member of the Woodbridge and Stafford workshops and is writing her first novel. "Punishment" is her first published story.